Rock the Rink - This event has already occurred

Add to My Calendar

By the half-way point of last year’s sold out Thank You Canada tour, it was clear to figure skating superstars, Tessa Virtue, Scott Moir and Patrick Chan, that they were far from done creating and developing a new style of skating entertainment.  Conversations then began in earnest to focus on the next logical step.  Virtue and Moir appeared on CTV’s Your Morning, to announce Rock The Rink – an annual tour that focuses on being more than a figure skating show. Combining the highest level of on-ice superstar talent with an ever-evolving touring production, Rock The Rink will produce the highest value of entertainment. This year – along with upgrades to lighting, video and interactive technology – live music will be introduced to the show, with featured special musical guest, Birds of Bellwoods.

The production will tour from coast-to-coast across Canada, and will include a few select U.S. cities as well.  The cast will again feature Canadian greats, Tessa Virtue and Scott Moir, Patrick Chan, Kaetlyn Osmond and Elvis Stojko. The show will also be bringing some world-renowned skating talent from Europe and the U.S..  Italian Olympic Medalist and World Champion, Carolina Kostner, and Olympic Medalist and four time U.S. National Champion, Jeremy Abbott, will return to Canadian touring for the first time in seven years.
**Lineup subject to change without notice

Discounted tickets are available for groups of 10 or more. Please contact info@firstclassgrouptickets.com for information. 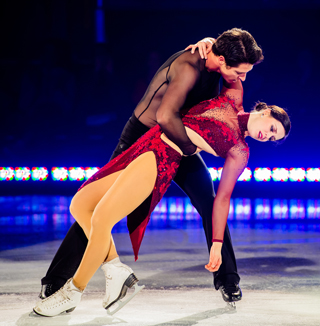